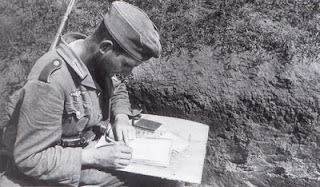 ...How many letters have I written up to now? Thirty-eight according to my calculations, today's included.  In August you wrote me that you keep a mail book, a real file of pen pals with their addresses and peculiarities, the dates you became acquainted with them, and how the friendships fared. It amused me greatly.  Did you add the picture which I sent you to your file?  My mail book is too inaccurate; your bookkeeping is probably better than the little marks I make in my pocket calendar. After all it doesn't really matter whether I wrote you 36 or 37 letters.  I am number five among your pen pals.  It must be very interesting to read all the letters you have received.  They come from all theaters of the war, don't they?  When the war is over, you will have a magnificent volume of memoirs in letter form. This year, at Christmas, we wanted to meet each other for the first time in Karlsruhe. Nothing came of it. The future also looks bleak to me, very bleak.  I see almost no hope.

Thank God, I have gotten around to saying it. There won't be any meeting; even the date for the coming year can't be kept.  Dear girl, what a fizzle! The stupid thing is that all one can do is look on; that's what's slowly driving me crazy.  If only I had toddled off for home in September, when I caught that shrapnel in my arm.  But I wanted to be around when we captured Stalingrad, and I have often regretted this crazy idea since.

They were pretty funny letters you received from me;  I have always been a joker, as you can testify.  But jokes won't help us along now; things are getting serious.

What will you write down in column six of your mail book?  In any case, don't write "He died for Greater Germany," etc., for that wouldn't be true.  Write "for Hanna on such and such a date" for all I care.  I hope you won't find this tone frivolous.  I mentioned your other pen pals.  One of these days, a few of them will go out of commission too. But their circumstances are different.  They will just stop writing all of a sudden.  Their letters will just stop coming.  But I give you formal notice. Fräulein Hanna, this is more or less my last letter, as it were. Farewell. The hope of seeing each other some day is being sacrificed to this idiotic and totally one-sided struggle. Farewell, and as a good-bye, my thanks for the time which you have lovingly devoted to me. At first I meant to write "wasted," but I thought better of it. It was not a waste of time, I got a great deal of pleasure from your letters.

________________________
A key to understanding this ongoing series is here, and here. Each letter (39 in all) was written by a different and anonymous German soldier who knew he was going to die. I associate these letters with Christmastime for reasons explained at the links.
Posted by chickelit at 8:41 AM