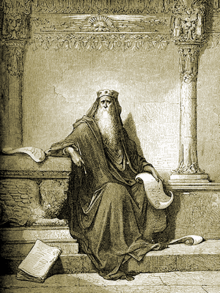 The Supreme Court echoed Ecclesiastes' "new thing under the sun" language in a case concerning the patentabilty of oil-eating bacteria, i.e., a species of living things engineered by humans. The decision recited:


The Committee Reports accompanying the 1952 [Patent] Act inform us that Congress intended statutory subject matter to "include anything under the sun that is made by man."
~Diamond v. Chakrabarty, 447 U.S., 303 (1980)

Compare "there is no new thing under the sun" with "anything under the sun that is made by man."  Novelty was inherent in the Supreme Court's phrase because they were construing 35 U.S.C. § 101, which provides:


Whoever invents or discovers any new and useful process, machine, manufacture, or composition of matter, or any new and useful improvement thereof, may obtain a patent therefor, subject to the conditions and requirements of this title.*

SCOTUS affirmed that micro-organisms constituted a composition of matter within the meaning of the statute.

Can we reconcile SCOTUS with the Old Testament?  Yes, if we consider Ecclesiastes to refer to matter per se and not to compositions of matter. New chemical compounds, even living organisms, are just old atoms put together in new ways.