I took my son to Pearl Harbor last summer. My family was on vacation, staying on the Big Island, but I insisted on flying over to Honolulu for a day trip and he wanted to go too. It was an expensive side trip, but I just couldn't get that close without paying my respects.

We got there early in the morning after all the morning tickets for the USS Arizona Memorial were already gone (I think they give the early ones to package tours--not to walk on visitors like us). Anyways, we got tickets for later the same day which gave us plenty of time to visit the nearby USS Missouri.

Japan surrendered onboard the USS Missouri in Tokyo Bay, less than four years after Pearl Harbor. I already wrote a bit about that ship back here. The Mighty Mo (BB 63) keeps vigil over the sunken remains of the USS Arizona (BB 39); the two ships are poised, bow-to-bow, symbolizing the beginning and the end of the Pacific War. The Missouri is worth a self-guided tour, much like the USS Midway in San Diego is.

Back at the Arizona, the US Park Service shows a great short documentary film narrated by Stockard Channing. I found a snippet of it here (wish I could find the whole thing):


The movie is well-made and teaches the whole inevitability of Pearl Harbor. It's emotionally moving too and softened me up before the boat ride over to the memorial perched over the wreckage. That's really all that's left on the surface--a memorial. A turret base still protrudes, amazingly, given that all iron needs to rust is water, salt, and oxygen. I credit the turret's longevity to the chromium and nickel mixed into the steel--Kruppstahl--but that's just me.

Underwater, the Arizona is remarkably intact.link Of course you can't dive her, but the Park Service does regular underwater inspections--but I found this cool model of the wreck back onshore: 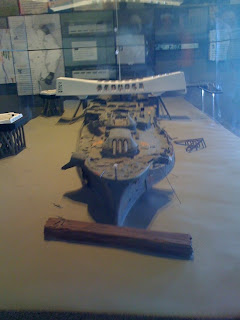 After paying our respects, we returned to the museum exhibits and various grounds and memorials.

This plaque touched me: 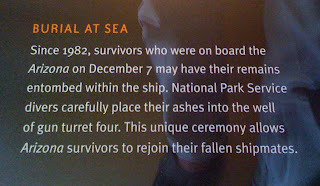 What a comfort to know where one's final remains belong!  That sentiment, along with the shipwreck aspect, reminded me of the last scene in James Cameron's Titanic where the fictional Rose Dawson rejoins her erstwhile lover in death:

Posted by chickelit at 6:08 AM

New comments are not allowed.