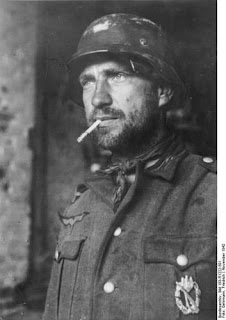 ...It's enough to drive me mad, dear Helmut; here I have a chance to write and I don't know to whom. A thousand poor devils who are lying in their holes up front and have no suspicion of such a chance would envy me and give me a year's pay for it. A year ago we were sitting in Jüterbog together, cramming "military science." And now I sit right in the middle of the shit and don't know what to do with all that trash. But it is just the same with everybody else around here. It is an idiotic situation. If you should ever notice the name 'Zaritza' in the OKW-report* (just possibly they might happen to tell the truth some day), then you'll know where I am. Do we live on the moon, or do you? We sit in the mud with 200,000 men, with nothing but Russians all around us, and are not permitted to say that we are encircled, completely and without hope.

I received your letter on Monday, today is Sunday, a real holiday. Above all, I would like to comment on the words with which you congratulated me for having been given front-line duty. I have just read Gneisenau (not everybody has time to do that) and would like to quote you a sentence which he wrote to Beguelin after the defense of Kolberg:


On reading this news, I thought that they might have heard the thunder of our cannon and might send up prayers for our salvation. There were days when the earth shook, and I behaved like gambler who bravely puts up his last louis d'or in the hope that his luck will turn. For there was a time once when I had ammunition for only fourteen days, and yet I could not decrease my fire for fear the enemy would become aware of my lack of ammunition. It is a scandal how badly this fortress was provided.

Ah, dear boy, those were the days. Gneisenau should have heard the rocket salvos, and the discharge of 200 guns per kilometer. Not only he, but you too, and then you wouldn't be in such a hurry to come "up front." Don't be peeved now. I don't want to shatter your faith in your own bravery, but here it would do no good. Here the brave and the cowards die in one hole without a chance of defending themselves. If just once we had ammunition for "only" 14 days, man! would we have had fun with the fireworks! My battery has just 26 rounds left, that's all, and there will be no more. Since you are one of the disciples of St. Barbara,* you can draw your own conclusions. Here I am: still in one piece, with a fairly normal pulse, a dozen cigarettes, had soup day before yesterday, liberated a canned ham today from a supply bomb (there is no more regular distribution; everyone is on his own), am squatting in a cellar, burning up furniture, 26 years old and otherwise no fool, one of those who was mighty keen on getting his bars and yelled Heil Hitler with the rest of you; and now it's either die like a dog or off to Siberia. That wouldn't be so bad. But to know that it is done for something utterly senseless makes me see so red.

But let them come. The third still has 26 rounds and their commander has an 08 with six shiny bullets. It is time to finish; "vespers" are coming, time to crawl a little deeper into the earth. Dear old boy, you can save yourself an answer to this letter, but think of my lines in, let's say, two weeks. You don't have to be clairvoyant to foresee the end. What it will actually be like, you'll never know.

St. Barbara was the patron saint of artillery.
Posted by chickelit at 2:41 PM