I found an interesting critique of the Socratic Method here: link  The author gives a brief summary of the method and enough links to start an earnest discussion, which the commenters took up.

One visual image which struck me was provided by commenter Jay in that link:


Assisting them in coming to that conclusion by providing with some questions for them to answer in their own words just facilitates that, and is a much more efficient way to prevail your point than simply telling them what it is and insisting on it’s superiority.

I say "visual image" because Linus Pauling's notion of catalysis sprang immediately to my mind: the lowering of barriers to change.  I illustrated this back here: 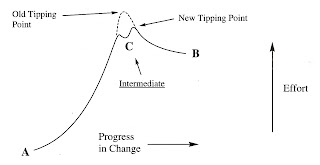 In nature, there are enzymes which work on enzymes and not just on lowly substrates.