Germanium Arrived According To Plan 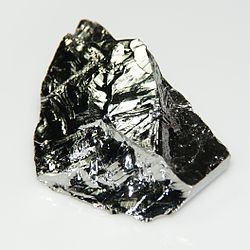 Germanium is a metalloid and thus only a half-metal. Despite this, it was a "planned" element. By planned I mean that its existence was foretold by the father of the periodic table, Russian chemist Dmitri Mendeleev.

Mendeleev was not the first to bring rhyme and reason to the elements--first came columns--Döbereiner's triads, and later rows--Newlands' Law of Octaves. But Mendeleev properly put together the whole kahuna, or at least what was known at the time. More importantly, he correctly predicted elements. Here's what he knew and what he knew must exist in 1871:


It's hard to see, but Mendeleev left a blank: "--  = 72 " in Group IV.  He called the unknown element eka-Silicon meaning one below Silicon. Eka-Silcon was discovered in 1886 and had an atomic mass of 72.6 amu. Van der Krogt tells the story of naming Germanium here, along with some Roman history.

Mendeleev also predicted the existence of eka-Aluminum and estimated its mass as 68.  The element was discovered and named Gallium in 1875 and had an atomic mass of 69.7 amu. The agreement between theory and experiment was almost as astonishing as Bode's Law. But Mendeleev's table survived.
Posted by chickelit at 6:20 PM