That Chicken had a lot of Gall!

Gallium, named after France (or was it a chicken?), lies just west of Germanium in the periodic table. An imaginary (Imaginot?) line separates them. Actually, both Gallium and Germanium are metallic but a clear demarcation runs diagonally east of Germanium, separating the metals from nonmetals--the "haves" and the "have nots" in terms of sharing the electronic wealth: 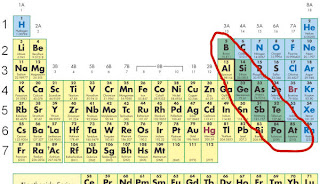 Once upon a time I briefly worked for an oil company in Cleveland. An older material scientist (whose name escapes me) once showed us interns a neat trick in the lab. He melted some Gallium metal (it melts in your hand) and showed us how a sheet of Aluminum will absorb Gallium (like dissolves like even liquid metals). The older gent, who was a British ex-pat, explained that during WW II, the RAF feared that the Germans would sneak over and sabotage their planes.  In those days, aircraft were often made of unpainted Aluminum.

Here is a video showing how Gallium wrecks an aluminum coke can. Imagine some nefarious kraut doing that to an airplane's wings.

The reason that Gallium liquifies is related to why Copper is so ductile and bears repeating: if you give an atom a perfectly filled sub shell along with one extra electron (the 31st one), the metallic bonding will be weak and non-directional. It all makes perfect sense to me.
Posted by chickelit at 8:50 AM