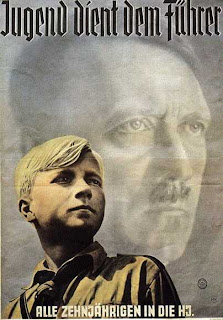 A young Wehrmacht soldier writes to his sister for the last time:

...Well, now you know that I shall never return. Break it to our parents gently. I am deeply shaken and doubt everything. I used to be strong and full of faith; now I am small and without faith. I will never know many of the things that happen here; but the little that I have taken part in is already so much that it chokes me. No one can tell me any longer that the men died with the words "Deutschland" or "Heil Hitler" on their lips. There is plenty of dying, no question of that; but the last word is "mother" or the name of someone dear, or just a cry for help. I have seen hundreds fall and die already, and many belonged to the Hitler Youth as I did; but all of them, if they could still speak, called for help or shouted a name which could not help them anyway.

The Führer made a firm promise to bail us out of here; they read it to us and we believed in it firmly. Even now I still believe it, because I have to believe in something. If it is not true, what else could I believe in? I would no longer need spring, summer, or anything that gives pleasure. So leave me my faith, dear Greta; all my life, at least eight years of it, I believed in the Führer and his word. It is terrible how they doubt it, and shameful to listen to what they say without being able to reply, because they have the facts on their side.

If what we were promised is not true, then Germany will be lost, for in that case no more promises can be kept. Oh, these doubts, these terrible doubts, if they could only be cleared up soon!