Elemental zinc is used like electronic paint. The element is always found as Zn2+, but it may be coaxed into taking back two electrons. The word "zinc" entered the lexicon via German, Zink, presumably when it was discovered by alchemists. The usual sources viz., van der Krogt and the OED are silent regarding a hunch of mine--that it was so named because of its toothy appearance. My trusty Duden Vol 7 confirms that the word Zink is distantly related to the German word for tooth, Zahn--apparently from the metal's appearance when freshly prepared.

We've all seen how zinc appears when coated on sheet metal. The pattern is called spangling and comes from the underlying crystalline zinc which to me also looks "toothy." 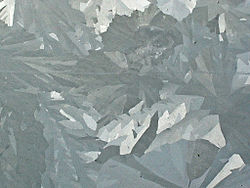 A thin layer of zinc oxide/carbonate passivates the underlying steel from oxygen, but even if the coating is scratched, the exposed iron will not corrode because adjacent zinc offers up its electrons instead. This basic notion was first conceived by Sir Humphry Davy in the context of protecting copper sheathing on ship's hulls. link  In the days of iron rails, little zinc spikes were hard-wired to rails and served the same purpose. Rail workers only needed to come by periodically and replace the spent zinc anodes and check the wiring. Nowadays, aluminum and magnesium anodes are also used, depending on the application.
Posted by chickelit at 12:06 PM