Letters Home: I Got 9 Months Left 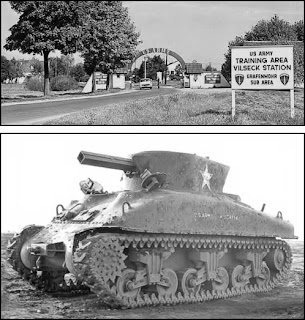 
Dear Mom Dad and All,


I haven't been doing too much lately. We are in Vilseck for 2 weeks. It's a tank training center.[1] Now that I am a jeep driver I suppose I will just be driving. We are in almost the same place where we was stranded last November. It's colder and there is more snow here than there is in Hanau. The coldest I've seen so far this year was 14 below but mostly it's been 30 and above freezing.

I got a Christmas card from Elma and Frank. I got the Democrat from you the other day. [2] I bet B. is still looking for her watch. I still haven't got the darn thing mailed. Any day now. I haven't got a letter from R. for quite a while. What has he been doing? Who is he going with now? I suppose he is thinking about coming to the Army sometime this spring. I got 9 months left. It's been 7 months since I been home. It don't seem that long does it? July 5 was when I was there last. We are supposed to get a shot for flu. But haven't yet. I got a letter from M. Friday. She said her and m. both had bad colds.[3] I had one but got rid of it.


Has the car been starting this winter? I am going to try to send more money next month. I'll need a lot when I get out. Ha! Ha! I might want to buy a Model A.

[2] The Richland Democrat, his hometown newspaper. Back in those days newspapers had no compunction about which political party they were for. This was fine because the other side had their voice too.

[3] "M" and "m" are his oldest sister and his baby niece respectively.
Posted by chickelit at 5:03 AM