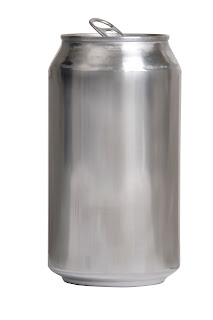 Van der Krogt's piece on aluminum is so fascinating, and so thorough regarding the discovery and naming of the 13th element that I suggest people go there for those aspects. Coincidentally, Friedrich Wöhler was involved in aluminum's discovery.

Aluminum, once considered a precious metal, is the third most abundant element on earth, after silicon and oxygen. Aluminum was so dear at one time that the Washington Monument was capped with pyramidal shaped cast of it. link  It's still up there. Aluminum was only precious because it was so hard to make in quantity in a pure form. The invention of the electric dynamo by Siemens dropped the price a thousand-fold.

Aluminum reacts spontaneously with oxygen and yet, never completely. Aluminum exemplifies a metallic property called passivation. Passivation occurs when a metal coats itself with a thin layer of its own oxide, thus protecting its inner mass from attack. It's a bit like sacrificing your skin to your enemy in self defence. This property only works if the oxide layer has the same physical density as the underlying inner metal. Anodized aluminum is a related technique of passivation and decorative colors may be introduced. Iron rusts so easily because the initially formed layer of rust shrinks and cracks the surface, exposing more fresh metal underneath and so on and so forth.

Political passivation entails coating oneself with a thin skin of your enemy's element.
Posted by chickelit at 2:15 PM