Magnesium Is Where The Photons Hit The Protons

According to van der Krogt, magnesium was so-named because:


The names magnesia alba and magnesia nigra are derived from Magnesia, Μαγνησια, a prefecture in Thessaly (Greece), with the capital Volos). Manganese and magnesium were abundant in oxide and carbonate ores in this region, and they therefore became referred to as Μαγνητις λιθος, or stones from Magnesia. The region also contained large amounts of iron oxides (magnetite, or lodestone, for example) so that the ores were magnetized. That explains why magnesium as well as magnet (and magnetism) are derived from Magnesia, while magnesium is not magnetic. link

Magnesium is essential to both plants and animals. Green plants are a great dietary source of the element. A magnesium ion sits right at the heart of each chlorophyll molecule in chloroplasts, part of the molecular machinery responsible for photosynthesis: 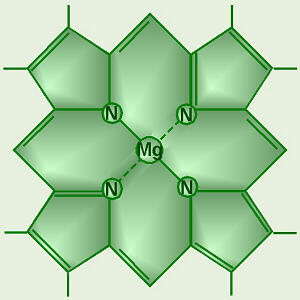 The drawing is a cartoon -- there are really several different forms of chlorophyll, each differing at its periphery.

Chlorophyll is an example of a metal porphyrin complex. A geometric array of linked rings (a porphyrin) surrounds a magnesium ion core. Another common metal porphyrin complex is the iron-centric hemoglobin food in blood; another related complex is cobalt-centric cobalamin or (vitamin B12) in the liver. Such metallo-centric molecules are also ubiquitous in synthetic organometallic chemistry, especially among catalysts.

As an aside, the notion that "Cartesian" is an artificial construct imposed upon nature is clearly not supported here. These molecules show a sort of rectilinear coordinate system: four nitrogens define the four cardinal directions. Such molecular geometry is a consequence of the underlying electronic structure which we take for granted.

Chlorophyll uses visible light photons to convert water into protons and electrons (whence my title) with oxygen as a waste product. The oxygen we breathe (approximately 20% of air) comes solely from bacteria, algae, and plants. The electrons and protons harvested by chlorophyll are subsequently used to reduce carbon dioxide into sugars, completing one half of global respiration.
Posted by chickelit at 10:00 PM