I've been working since age 12: 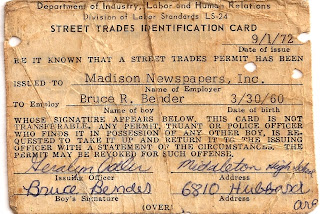 I had a morning paper route circa 1972-75, until I was old enough for a regular job. I had part-time jobs all the way through high school and college and even when I went on vacation to Italy in 1979.

Back then, I'd rise every morning at 5:30 AM rain or snow to bring people the Wisconsin State Journal. I took over the route from my older brother who in turn got the route from a friend. That's the way those things were passed around back then--sort of like Packer's season tickets.

Afternoon routes were the most coveted among boys then because...well...because you didn't have to get up every morning at 5:30 AM rain or snow and bring people the morning news -- you could do it after school instead. Of course that meant you couldn't go out for football or any other sports but hey: some boys played and some had to work. But having a morning route, I was able to have it all: work, study (lol) and go out for football. But my football career didn't get past Junior Varsity.

One of my better paperboy memories are the special treats I used to get from customers like the one I mentioned here. Another memory is of the young girl I had a huge crush on and whose family was on my route. Back then we had to go around and collect money due for the paper. I never went to her house because I felt embarrassed about being her paperboy. Her family got a free paper for maybe a year or so.

Most of all I remember the political times back then. I watched the demise of the Nixon Administration little by little and delivered that news every day. I still remember the black-inked headline moments:

PRESIDENT RESIGNS AS FORD SWORN IN

Those were rougher times for civil politics.


_______________________
My son is now the same age I was when I started working. And he's starting to want things the way I did. Freedom and economic independence.  There aren't many jobs now like I had for 12 year olds. Grown-ups in cars deliver newspapers now. He needs a lucky break like I got when I was twelve. I think I've got this figured out too.
Posted by chickelit at 7:30 AM