My best musical memory of 1979 was seeing the original Patti Smith Group play what turned out to be their last concert ever. Of course nobody knew that at the time. I didn't know for years after that it was their last concert. But after that show Smith went into semi-retirement, married Fred Smith and moved to Detroit to raise a family. And I was fortunately there that night.

The concert was in Florence and was just part of a glorious 1979 trip to Italy that summer. I could and should blog that whole summer experience because it was so defining and yet eye-opening for me. So much discovery. I came back and felt a little like il Marco Pollo, telling my Midwestern friends and family about good Italian coffee (which you could only get in fine restaurants in Madison then) and the food--OMG the food!  I even learned to love black olives.

The concert was, as the Italians might say, un disastro. The band's actual play list is recorded here and sounds vaguely familiar. There's a cache of photos here. Of course I look for myself in them. From my vantage point, a bit off to the right (stage left) and elevated in the stands just a bit, things look just as I remember them except that they're colored by my memories.

It's the chaos that happened at the end that I remember best. The crowd had been allowed right up to the stage's edge, which apparently was a mistake. But her real "mistake" was to raise an American flag during a penultimate song. The crowd went pazzo and took the stage. Patti Smith corroborates here. Unruly men surrounded her and cut her off from the other band members. Frightened and fearless, Smith improvised. She tried to humor them, playing them a piano rendition of You Light Up My Life. It became a real stand off and fortunately no real violence ensued. I felt helpless--as both a fan and as an American. She was surrounded by ostensibly adoring fans and yet she looked and acted like a hostage. That little concert stage scene foreshadowed the world stage because two months later Iranian students stormed our embassy in Tehran. It's all a bit surreal in retrospect.

I'll add another piece of material to the mix besides my concert ticket stub (above): a photo of a concert poster before the show: 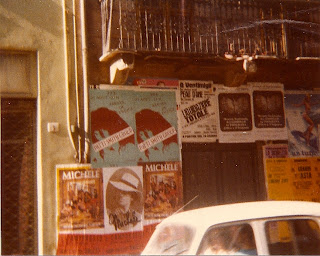 Had people known what they had seen then they would have been tearing those posters off the walls after the show as souvenirs. I used to have a poster from the event--not the flimsy plaster-posters like in that photo but a gorgeous lithographed one, done on nice card stock with blue ink. A shopkeeper gave it to me before the show that day and I carried it to the show. When I search the photos from that historic concert, I'm always looking for my 19-year old self carrying that rolled-up poster. Sadly, I lost that poster somewhere along the long, long pathway from there to here but at least I still have the memories and thank God for that.

[Added: I augmented my memories with what I actually wrote at the time here]
Posted by chickelit at 8:30 AM