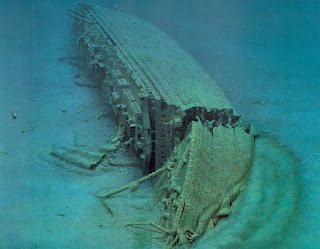 It's pretty cool when you realize that the germ of something became something bigger.

I watched Calypso's Search for the Britannic, an episode from The Jacques Cousteau Odyssey. The feature dates from 1977 and tells the story of Cousteau's successful 1975 search for the sunken ship Britannic off the coast of Greece.

HMHS Britannic was built during that brief window of time between the sinking of her older sister Titanic and the First World War. She was launched without fanfare. One disgruntled ship worker said of her: "They just built her and threw her out there."

Britannic was fitted-out with all the features intended to avoid her older sister's fate: double-hulls; water-tight bulkheads which rose to B deck, and of course there were ample lifeboats. Intended to replace Titanic as a luxury trans-Atlantic liner, HMHS Britannic was instead pressed into service as a hospital ship and was sunk by a submerged mine just two years after her launch in 1914.

The remarkable thing about the old TV episode is how it foreshadowed James Cameron's Titanic. Cousteau located one of her few remaining survivors, Sheila Mitchell (then 86 years old), flew her to the Calypso hovered over the wreck, plied her memories of the sinking and then took her down in a submersible to see the wreck -- one last time -- just like fictional character Rose Dawson in Titanic. I seriously wonder whether Cameron watched or was inspired by this 1977 televised episode.

I also couldn't help but marvel at the man Cousteau himself. At age 65, he dons helium-oxygen-filled scuba tanks and freely descends to over 300 feet to explore the wreck--for 9 minutes. The hour long episode (available on Netflix) is as much a lessen on deep-sea scuba diving as it is on the Britannic. Growing up, Cousteau was a hero in our family, no doubt due to my dad's love of scuba diving which I wrote about here.

[added: a cool website on the HMHS Britannic: link]
Posted by chickelit at 3:08 PM