Ron (@kngFish) tweeted me a video link the other day:

His link goes to:

The drum track on that Benny Goodman song caught my ear. I was, for some reason, instantly reminded of the drums on this (still unidentified) instrumental surf track:

Are the two drum tracks separated at birth?

I think so. They share something. They share a common influence--the great jazz and bebop drummers of the 30's, 40's, 50's and 60's. I cannot recall the name of the surfer band in my YouTube link. I recorded it from the radio in Madison, WI in the late 80's. I initially marked it as Link Wray--however, I have since been unable to verify this nor match it to any Link Wray tune.

The drummers of that bygone era all learned their chops from the greats like Gene Krupa.

Jim Chapin (1919-2009) wrote a highly influential book called Advanced Techniques for the Modern Drummer, first published in 1948 and which went through about 60-odd printings: 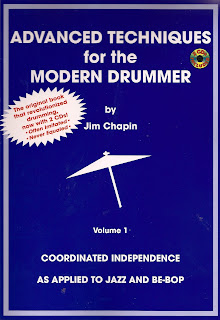 I bought a copy around 1976 at Ward-Brodt Music on Henry St. in Madison when I took lessons (briefly) from a local jazz drummer. I lost my original somewhere, but recently bought another copy.
It's a classic.
Posted by chickelit at 11:10 PM