Silicon Is Where The Flintstones Meet The Jetsons 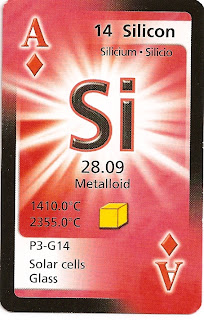 Van der Krogt has the usual collection of fascinating facts, histories and stories about silicon. link

Silicon's chemical properties rhyme with carbon's. Silicon lies right under carbon as one of the Group 14 elements in The Table. I also like the juxtaposition of SiO2 and CO2 but the two molecules couldn't be more different. One is a gas and the other is as solid as rock. SiO2 is rock. How wonderful if we could polymerize CO2 or depolymerize sand, but we just can't.

I wrote about CO2 back here but none of that is too relevant to SiO2. Silicon is to rock what carbon is to life; it's in practically everything inorganic. Silicon appears in as many species of rocks and minerals as carbon appears in forms of life. And then there is the whole artificial intelligence lodged in silicon chips -- "life" created in our own image. That brings me to the Silicon Valley. I have some reflections on living and working there, but I'm not ready to go back there yet. In a sense, my "Conversations with Henry" series belongs to that time and place.

I think that a William Shockley biography could be seriously fascinating. Ditto Madisonian John Bardeen and Walter Brattain. I'm curious about silicon chips and want to know more about how they actually work. Silicon comprises the bulk of solar cells too.

A little know fact is that Shockley's first solid state transistor company (which later spawned Intel) was funded by Arnold Beckman (1900-2004). Beckman invented the pH meter and invested his profits wisely, mostly seeding American ingenuity. In many unappreciated ways, Beckman was yet another humble Midwesterner behind the scenes of American greatness.

There's artificial intelligence and then there's artificial breasts. I also thought about writing about silicone breast implants. That might have engendered a lot of hits. Or maybe not. Silly Putty boobs -- meh.
Posted by chickelit at 6:30 AM