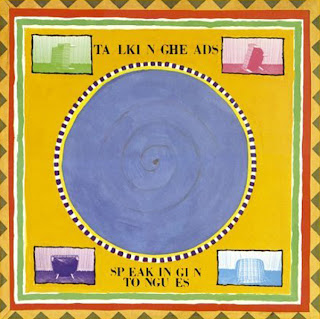 Speaking In Tongues by The Talking Heads. There are just so many good songs on this album like Burning Down the House, Slippery People, Swamp, Girlfriend Is Better, and Pull up the Roots. The Talking Heads were immortalized in Jonathon Demme's Stop Making Sense (1984).

War by U2. The last U2 album that I bought. I got off the bandwagon when others got on. Was it the overt politics?

Every Breath You Take by the The Police. Sting gave full reign expression to his stalker obsession with his ex-wife.

Girls Just Want To Have Fun by Cyndi Lauper. Oh yeah, they do.

Pink Houses by John Mellencamp who sang about America from a Hoosier point of view. Something about this song reminds me of Meadhouse.

Photograph by Def Leppard. Big hit from their album Pyromania. I thought the name Def Leppard was a pun on the band Sun Blind Lion but I guess I was wrong.  Hi Darcy!

Owner of a Lonely Heart by Yes. I used to like this band a lot. I think Simon still likes them.

Modern Love and China Girl by David Bowie shows more cultural sensitivity than Rod Stewart did when he sang about his "slit-eyed lady" in Every Picture Tells a Story.

99 Luftballoons by Nena. A side-by-side comparison of the German and English lyrics reveals how lame and softened the English version lyrics are. link The original German version makes several references to Nazi-era and post war imagery and jibes with the post-War pacifist streak so prevalent in German society.

Eyes Without a Face by Billy Idol. I figured out that part of Billy Idol's appeal was his sneer which is on full display here.

Institutionalized by Suicidal Tendencies  The song captures the Zeitgeist.

When The Shit Hits The Fan by The Circle Jerks. I linked to the "unplugged" version because the lyrics are easier to follow. Sample lyrics:


In a sluggish economy
Inflation, recession,
Hits the Land of the Free.
Standing on an employment line.
Blame the government for hard times.
We just get by, however we can.
We all gotta duck when the shit hits the fan.

Age of Consent by New Order. These guys were all that was left of Joy Division after Ian Curtis's suicide in 1980.

Pride and Joy by Stevie Ray Vaughan & Double Trouble from their debut Texas Flood. SRV came out of Texas. A record deal brokered by the legendary John Hammond launched his career. I was lucky enough to see SRV twice before his premature death.

The New World by X from More Fun in the World. When John Doe and Exene sang "It was better before before they voted for what's-his-name" they were singing about Ronald Reagan. How's that working out for you these days Mr. Doe?

Sharp Dressed Man & Legs  by ZZ Top. Where were these guys for the last 10 years? It may have taken that long to grow out those beards. Hot chicks in the video.

Posted by chickelit at 7:37 AM