There was only one best album of 1988 for me, and there were only a few noteworthy singles. It wasn't me getting old either, because things really picked again in the 90's. 1988 did coincide with paradigm shifts in the music industry. Look at the following chart: 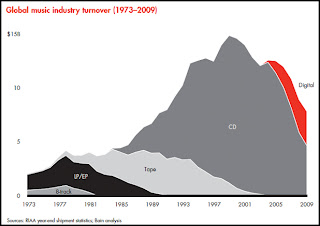 Vinyl albums were dead by 1988. Many people were just re-buying favorites in CD format.  I have no clue what was happening on MTV then.

Daydream Nation by Sonic Youth. Sonic Youth had been around awhile already but they failed to incite or ignite much in me until this album. Truly avant-grunge, their sound picked up where so many had tried (and ultimately given up).  The thing about Sonic Youth was they didn't seem to care about the money.  They exuded coolness, and that was enough for them. 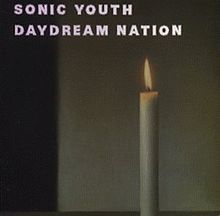 Colors by Ice T, cataloging the decline of L.A.

I Drink Alone by George Thorogood, cataloging some personal decline.

Hello Dad, I'm In Jail by Was (Not Was), cataloging the further decline of Detroit.

It was mourning in America again, in many ways.
Posted by chickelit at 9:54 PM