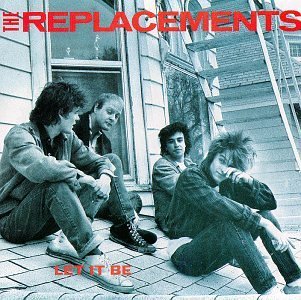 Let It Be by The Replacements. The jangling guitar solo on the first song I Will Dare kind of sounds like Peter Buck from R.E.M. -- and so it is!  Unsatisfied is the anthemic masterpiece from this, the first of three very good successive albums by the Replacements. It's still hard for me to grasp how and why these guys didn't make it commercially.

Zen Arcade by Hüsker Dü. Hüsker Dü took their name from a children's board game. link  They, along with Prince and The Replacements, put Minneapolis on the map of American music. I owe my introduction to these bands at this time to a friend named Bill Amundson who then lived in Fort Collins, CO.

Couldn't Stand The Weather by Stevie Ray Vaughan. SRV pulls off a cover version of Hendrix's Voodoo Chile (Slight Return). This is about as close as any mortal got to covering Hendrix.

Learning To Crawl by The Pretenders. This was the album I saw them play in Akron OH, while I lived in Cleveland.


Drive by The Cars. This song will forever remind me of a girl I dated in Cleveland around this time. I didn't have a car then.

Time After Time by Cyndi Lauper. Another MTV classic from around this time.

Eight Miles High by Hüsker Dü. Pure metallic angst. This song was released on a 45 RPM single on STT records.

Repo Man by Iggy Pop. Never released as a single to my knowledge. The version I know and love is from Alex Cox's 1984 film Repo Man. The entire soundtrack for that movie is a great screen capture of that time.

The Ghost in You by The Psychedelic Furs. I know why that song haunts me.

Panama by Van Halen. Though already formulaic and beginning to choke on hubris, they still crunched enough to catch my attention with this one.

Posted by chickelit at 7:39 AM