Worthwhile change always requires sustained effort. Getting from point A to point B is an uphill slog and has a tipping point--the point where just enough energy and will power is expended to get to point B. The tipping point comes late along the uphill pathway. To illustrate: 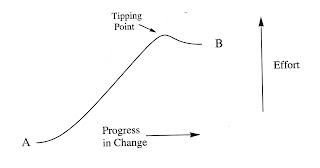 Tipping points are important because measured in effort they represent the maximal effort required to get to point B. From the the tipping point it's but a short distance to B, the goal. For example, I don’t decide to lose weight, join a gym and credibly say I’ve changed (psychologically perhaps, but not physically) until I reach that tipping point which is well along towards the goal. Understanding the factors involved in the tipping point could, in theory, lower the barrier to such a change.

Downhill change also has a tipping point, but it lies closer to the starting point A: 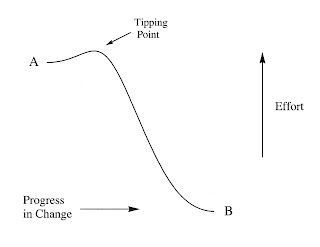 Downhill change is "easy" in the sense that not much effort is required to reach the tipping point: gravity, age, chaos and disorder bring us to a point B which is lower than where we started from at point A. In this scheme, "effort" is not negative, but rather represents what it would take to climb backwards from point B to point A. A lifetime of cascading tipping points can ratchet down to a dire circumstance.  Death and decay are the ultimate energetic low points. The only way back out is a sustained uphill effort.
Posted by chickelit at 10:23 AM