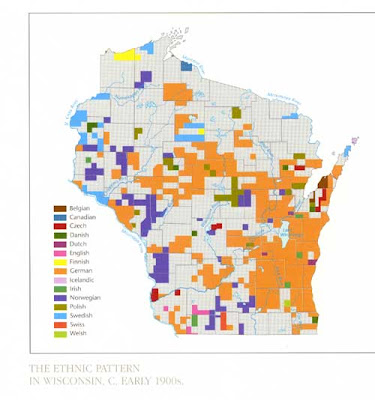 -Fred L. Holmes writing in the preface to his Old World Wisconsin (1944):

Through many questionings and wanderings in my native state, I have formed an appreciation, beyond ordinary measure, of the people who are Wisconsin. To know them from their racial backgrounds through their New World cultures is to understand more clearly the reason for our hegemony in the family of states. They came from youthful, youthful stock of many Old World nationalities--seekers after freedom in religion and government; pursuers of opportunities; men and women of pioneering strength and courage, anxious to weave their lives into the warp of national existence. Wisconsin history has been enriched by them.

Wars become universal innovators.  During centuries of peace, customs change but little.  Religion, language, and habits strive to keep alive the past.  While sojourning among the Wisconsin people of racial memories, I have listened to the legends of lands across the sea as handed down from mouth to mouth, from generation to generation; visited scenes of their high emprise and holy devotion; observed customs that time has seen practiced through many decades; enjoyed the pageantry of ancient drama.  No other state has gathered in a melting pot such a diversity of rural and urban foreign groups. With them I turned the pages of living history.

Each little transplanted group has its own individuality.  Ways of dress, eating and worship are all different.  My own wanderings through Europe have been taken by the vicarious method of trodding the byways of newer Wisconsin. The wings I saw and the voices I heard in these Old World-New World communities are here told against a background of Yankee advance.


Holmes' book is still in print as a paperback: link
Posted by chickelit at 11:37 AM