The Hippies: By Hunter S. Thompson 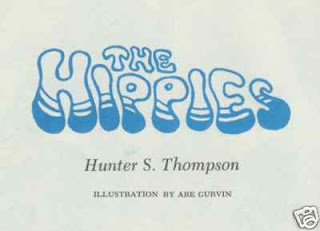 My parents bought us a set of Collier's Encyclopedia when we were kids.  They may have been conned into it by a door-to-door salesman.  If so, I'm glad they were. I can remember poring through those volumes as a kid, much like I do now with Wikipedia, just randomly looking stuff up.

The Collier's Encyclopedia came with a supplementary annual Yearbook and we got that too, well into the early 1970's. The Yearbooks had feature articles covering the year's previous events. Two articles from those books stand out in my memory: The first was a black and white photograph of Jimi Hendrix (which I had never seen before nor have seen since) in the 1971 (covering the year 1970) volume.  The second was an article from the 1968 volume written by none other than Hunter S. Thompson, covering the Haight-Ashbury scene of that infamous Summer Of Love the previous year.  Now Hunter Thompson ended up doing do some pretty weird things later on but to me, as a kid, he wrote and sounded like everybody else who wrote for an Encyclopedia in 1968:

The best year to be a hippie was 1965, but then there was not much to write about, because not much was happening in public and most of what was happening in private was illegal. The real year of the hippie was 1966, despite the lack of publicity, which in 1967 gave way to a nationwide avalanche in Look, Life, Time, Newsweek, the Atlantic, the New York Times, the Saturday Evening Post, and even the Aspen Illustrated News, which did a special issue on hippies in August of 1967 and made a record sale of all but 6 copies of a 3,500-copy press run. But 1967 was not really a good year to be a hippie. It was a good year for salesmen and exhibitionists who called themselves hippies and gave colorful interviews for the benefit of the mass media, but serious hippies, with nothing to sell, found that they had little to gain and a lot to lose by becoming public figures. Many were harassed and arrested for no other reason than their sudden identification with a so-called cult of sex and drugs. The publicity rumble, which seemed like a joke at first, turned into a menacing landslide. So quite a few people who might have been called the original hippies in 1965 had dropped out of sight by the time hippies became a national fad in 1967.


You can read Thompson's whole essay here (scroll down about a third of the way).
Posted by chickelit at 3:46 PM