There is a fascinating fundamental disagreement here about what is courage and what is cowardice. What is defending our civilization and what is betraying it. The views are diametrically, 180 degrees opposed. And in some crazy way they chase each other in a circle, like a snake swallowing its own tail.

There is the irony of defending an open society by closing it.

But there is also the irony of being so tolerant you tolerate intolerance.

Meditate on that pair for a while.


OK, imagine a line segment having at each end an opposite charge. Along the line between the two ends is a "continuum" with neutrality in the middle.*
It might look something like this:


The views are diametrically, 180 degrees opposed.

Political opposites supposedly repel each other, but suppose that just as in nature, opposites actually attract. They attract but never merge with each other, like two oppositely charged ions: Na+ and Cl-.

A political analogy could be like the "attraction" between fascism and communism along the border between Germany and Russia in WW II. But in that case, the attraction was an action-reaction phenomenon.

Now suppose that the two ends begin to attract each other, bending the line into a circle trying to meet. We have the makings of:

The views are diametrically, 180 degrees opposed. And in some crazy way they chase each other in a circle, like a snake swallowing its own tail. 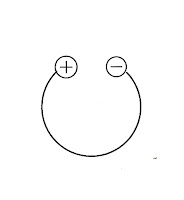 The more neutral elements along the continuum between the two extrema are not directly involved in the polarized attraction, yet they "feel" the strain of the curvature.


There is the irony of defending an open society by closing it.

The political spectrum is closing up on itself. Perhaps it's just a reflexive defense posture but I sincerely doubt such polarized "circling of the wagons" is unprecedented. It's been a while since we've had something truly unprecedented and I doubt this is it--yet. Anyways the circle is just a metaphor.


But there is also the irony of being so tolerant you tolerate intolerance.

I hear this mostly from those who feel uncomfortable being "polarized" by the extremes at one end or the other. They are the neutral ones, the "covalent" elements.* In the circle scheme they are around the ring from, and approximately equidistant away from, the polarized heads, yet they feel the strain.  Perhaps the irony comes from being so far removed. As the Dutch learned, there's nothing good about tolerating intolerance.

The polarized ends of the spectrum are actually surrounded by smaller, oppositely charged entities: 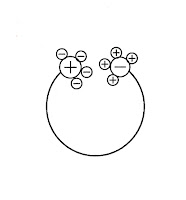 A coterie of independent detractors surrounds each extreme. They serve an important purpose: they neutralize some of the raw charge of the extreme. They also prevent direct and destructive collisions and arcing between the polarized ends. They are part of free speech and they ultimately help to unbend the spectrum, to relax it back to a more linear shape.
______________
*The spectrum model is analogous to a periodic row of elements with lithium and fluorine being the two extrema and the covalent elements B, C, N lying in between. link [Fixed the link]
Posted by chickelit at 11:41 AM