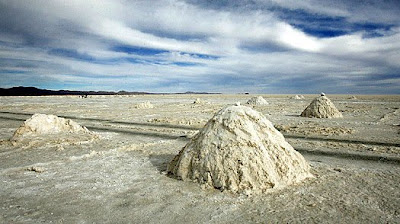 Back to chemblogging for a bit.  Hmmm, let's see...I left off quite a while ago with lithium, helium, and hydrogen. I'll finish off lithium before moving onto beryllium, the fourth element.

Lithium Pharmacology
Lithium (or more accurately Li+) is pharmacologically active and is used to treat bipolar disorder. It's not at all clear to me (nor to Wiki) how this works.  Let's improvise. Here's my armchair analysis:
Observations: (1) In the body, Li+ is awash with lots of similar cations, namely, sodium (Na+) and potassium (K+). Moreover, there's realistically no way that one could swamp the body with so much Li+ that it would simply displace Na+ and K+; moreover, both sodium and potassium are essential and we'd die without them. Better to look for something that Li+ does better than Na+ and K+ do.
(2) Lithium is found in nature as lithium carbonate (in nature, elements tend to be found with other elements for which they have natural affinity). There is also experimental evidence that Li+ binds better to carboxylate groups, –CO2(-) than do either Na+ or K+:  ref.  In other words, Li+ has a higher affinity for the carboxylate functional group1 and could displace a greater concentration of Na+ and K+. The pharmacists already know about this special affinity and Li+ is commonly formulated as lithium citrate:

Notice that the citrate has three carboxylate groups. Lithium citrate was once an ingredient in 7-Up, the Uncola, but was removed in 1950. It's important to realize that once in the body, the citrate part is easily chewed up and metabolized, leaving three Li+ cations, each in search of a carboxylate.
(3) Carboxylates are ubiquitous, being the terminal side chain of common amino acids aspartic acid and glutamic acid.
(4) Glutamate is implicated in all kinds of neurochemical functions.

Hypothesis: Li+ displaces Na+ to such an extent as to affect the role of glutamate. The carboxylate functional groups are intimately involved in how neurotransmissions occur.  Essentially what lithium does is to monkey wrench this somehow. Anyway, it's just food for thought. Prove it wrong. A cursory Google search suggests there is something to this: ref, ref, and ref.

There are other proposed mechanisms of action for lithium and, if interested, check out the Wiki page here.  I love ill-defined chemical mechanisms, especially when an element is involved.  I'll return to this theme when I consider the essential role of boron (element 5, after beryllium) in plants. Meanwhile, I hope a lithium expert finds this blogpost and jumps in to correct me. I will retract the hypothesis.

Lithium Ion Batteries
Lithium ion batteries power lots of everyday electronic gadgets like cellphones, laptops and other electronic gadgets and, hopefully soon, lots of electric cars. Several generations of rechargeable batteries include lead-acid, nickel-cadium, nickel-metal hydride (NMH), lithium, and now lithium ion. By far and away the lithium ion battery is superior--enough to revolutionize the small gadget industry. Why is that?
First, it's very light. Lead-acid (think 12 V car batteries) and NMH batteries (think Prius batteries) are very heavy. Old fashioned carbon-zinc batteries are light but are not rechargable). Weight is very counterproductive deadweight when you're trying to move something around.
Second, lithium has a relatively high redox potential2 for conversion of Li+ to lithium metal. Early lithium batteries did in fact use lithium metal and lithium ions, however it was quickly realized that the dangers of using lithium metal could not be overcome.  Lithium is a highly electropositive element and would seem well suited for 3 V applications. If you consider that the nominal voltage of common batteries: viz., AA, AAA, C, and D is, 1.5 V you'll realize that a 3.0 V battery would be useful, given that 3 V is commonly acheived by using two 1.5 V batteries in series. (This is why so many devices use two such batteries head to tail).
Lithium’s exceptional light weight is currently wasted in present generation batteries, especially automobile-sized ones: the battery train for the Chevy Volt weighs about 600 lbs. Much of this weight is due to cobalt oxide present. However, next generation breathing batteries intend to do away with the relatively heavy cobalt or iron-based components. I really hope the Volt does well and I suspect it will. Detroit needs a home run like the Toyota Pruis. I think the Volt is especially suited for the urban coastal hipsters. Me? I'll stick with diesel for the time being.


Lithium in Synthetic Organic Chemistry
The wonderful and unique properties of lithium just go on and on. A single inorganic compound, LiAlH4 or LAH in the parlance, enabled the synthesis of entirely new classes of compounds, including pharmaceuticals. Organolithiums are a class of compounds wherein lithium replaces a hydrogen atom.  They are useful because they allow carbon in a hydrocarbon to behave as a negatively charged anion-a carbanion. Carbon normally engages in chemical reactions as an electrophile, i.e., having a tendency to attract negatively charged coupling partners. An obvious example of this is peptide synthesis in which donor nitrogen meets acceptor carbon.
Alkali metals, Li, Na, potassium, etc. dissolve in liquid ammonia to give intense blue solutions. Liquid ammonia itself is colorless, and so are solutions of Li+.  The blue color comes from solvated electrons:
Na   --------> Na+ [e–]
NH3
The compound is called sodium electride.  You can watch it form here


Worries About Lithium Supplies
Worries about Bolivia becoming the Saudi Arabia of lithium are overblown.

Last but not least, don't forget the dilithium crystals!
______________________________
1Functional Group defined
2 Redox Potential is term of art and usually refers to chemical element's potential to gain or lose an electron. In lithium, there is a high propensity for the metal to lose one electron and thus obtain the noble gas electronic configuration of helium.
Posted by chickelit at 3:30 PM