Letters Home: "I can pick up a lot of hillbilly and western that comes in from Nashville" 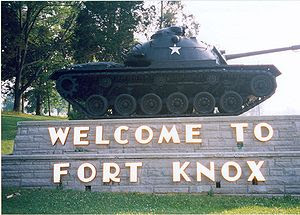 The Army used to have four heavy armor divisions, viz., the 1st, 2nd, 3rd, and 4th Armored Divisions (ADs).  Of these, only the 1st AD remains active.  The 3rd AD was established during WW II and saw a lot action in the European Theatre. More info here.  After WW II, the 3rd Armored Division (The "Third Herd") was reestablished at Fort Knox KY, which had been a fortified encampment since the Civil War. My father was in the 3rd AD during the Cold War between the years 1951 to 1953. In this letter home he describes additional training as well as off-duty diversions. Footnotes are mine:

Today is Sunday and I haven’t got anything to do so I thought I would drop you a line. I am listening to a program from Chicago.[1]  That’s the nearest home radio station. I can pick up a lot of hillbilly and western that comes in from Nashville.[2]

We had to go out Sat. morning and clear some land. They are making a new training course. It will be too muddy this winter for us to use it. We might have to in the spring if the weather dries up. Did you get that box? I got the socks and pants Sat.

It snowed about a hour here this morning, but it all melted off in 2 hrs. I think it will clear up for Monday. I went to the show last night. The Sell Out was the name of it.  Has that show about tanks come to R.C. yet? [3]

We start our 6th week training tomorrow. I guess we have to make up the two weeks during leave, in the spring. I heard we would be through training March 27, but I don’t know how true it is. Anyway it won’t be so cold here that time of year.

Have you heard that new song out Shrimp Boats is a Coming? [4] I think it’s a old song revised.

Did F____ make it back to camp alright? Some of the boys around here are still AWOL. Absent without leave.

I had two teeth filled Sat. afternoon. It was a couple that E___ was supposed to fix but I never got around to getting a appointment. I have to go again the 15th. I don’t think I need anymore fillings. I suppose he is going to clean them. As long as it don’t cost me anything, I am going to let them fix um up.[5] Some of the guys need work in their teeth worse than I do but we are going ABC and so on down the line. I wrote J__ a letter last week so should be hearing from him next week or the week after. [6] We have been having nice weather except yesterday it rained. Its getting along towards chow time so will sign off for now.

___________________________
[1] WLS (890 AM), I presume. WLS has been around forever and had the strongest signal out of Chicago.
[2] In the early 1950's, "Hillbilly and Western" was synonymous with "Country and Western". The term "Country" later replaced "Hillbilly" because the latter term was considered degrading Link.  Nashville, home base for the Grand Ole Opry, was slowly being challenged by Memphis, which was then birthing the musical fusion only later called Rock n Roll.
[3] "Show" is short for "picture show" which was then a common term in rural Wisconsin. The show he's referring to coming to Richland Center is "The Tanks Are Coming".
[4] The song is actually called "Shrimp Boats" and was recorded by Jo Stafford.
[5] This is the healthcare public option in a nutshell: I want healthcare, but I want it to be free. :)
[6] J__ was his older brother, and was then stationed in Korea.
Posted by chickelit at 12:01 AM