Beryllium Is A Sweet Precious Gift 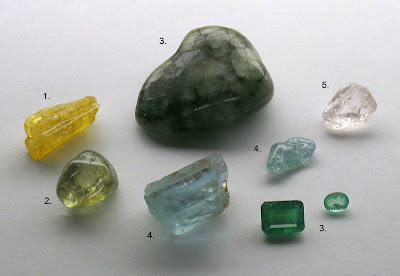 The root word of beryllium is old and familiar and lurks beneath the surface of the commonly used word brilliant:

Beryl and emeralds were known to Pliny the Elder nearly 2000 years ago and he first observed a physical similarity between the two. In the Middle Ages, transparent, colorless beryl was used to make optical lenses, whence the German word Brille which today still means eyeglasses. The invention and manufacture of actual glass spectacles developed in Italy in the 13th century and improvements followed closely with the development of optics.

The minerologist R.-J. Haüy also observed the remarkable similarity between beryl and emerald (hardness and density), and he persuaded the pre-eminent chemist/pharmacist of his time (late 18th century) Louis Vauquelin (of Paris) to analyze the stones to see if they were chemically alike. In 1798, Vauquelin showed that both minerals contained not only alumina and silica as had previously been known, but also a new element, beryllium, which he extracted as the oxide from emerald. Fredrich Wöhler first prepared metallic beryllium by reducing BeCl2, with potassium metal. Thus the new element beryllium was discovered.

One caveat: until around 1948, beryllium (symbol = Be) was also known as Glucinium (symbol Gl), reportedly because of the sweetish taste of its chloride salts.

WARNING: Beryllium is considered to be highly toxic so do not, repeat do not taste or chew your precious emeralds!