"I am listening to some Kentucky hillbilly music now" 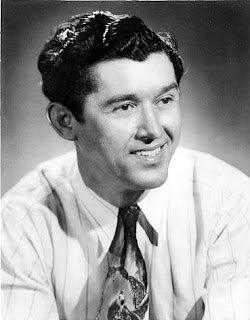 This is the fourth post in a series.  Previous posts are here, here, and here. Or just click on the tag "Letters Home".
Having spent Christmas back home in Richland Center, my father hopped a train back to Fort Knox from Madison via Chicago and Louisville.  Here he tells of his brief layover at Chicago's Union Station and admits to his parents that he listens to "Kentucky hillbilly music."  Can you guess whose photo that is?

I got to camp at 9:00 this morning. It sure was a tiresome ride from Chicago. We was supposed to be in Chicago at 1:00 fri. afternoon and I didn’t get there till 3:00 so I had to wait till 11:00 that night to catch the next train. I walked up to State St. Sure is a lot bigger than the one in Madison. I saw a helicopter land on a big building.

I forgot and brought my car keys so I am sending them and some other things home the first of the week. R’s $5 will be in it to. Did you get the check yet? It should be coming. I got paid as soon as I got here.

I had to open the big casing bag again because my train ticket was in it. Ha! Ha! It didn’t tear out too much. I will either sew it or get the shoe cobbler to sew it next Sat.  I am going to take a hot shower and go to bed tonight. I forgot and left my other necktie. You can send it sometime. Among some of the mail that was waiting for me was a Christmas card from Mr. and Mrs. H__ D__.

I am listening to some Kentucky hillbilly music now. My radio works good. It rained here Christmas but that was all the bad weather they had here for the last week. It looks cloudy out now and like rain.

There sure was a lot of snow in Chicago. Some of the streets were blocked off. When we left Chicago I had 85¢. It cost 75¢ by Greyhound from Louisville to Knox, 32 miles and 10¢ from the main post to my barracks so I just broke even. It’s a good thing we got paid today. I still got some of the hard candy I got over to grandma’s. [1]

I didn’t get to buy the kids much but I will bring something home in the spring. There is a lot of things at the PX I could get if I had the money that D__ and B__ would like. I might be able to save a little besides the $50 I send home a month.

I didn’t know I had seen the loop [2] till I got back to camp and was telling a boy some of the places I saw on State and Madison Str’s.

I got K.P. tomorrow so I doubt if I will get to go to church tomorrow. I won’t mail this till Mon.

I carried that light plug all the way down here. I washed out 2 pair of socks tonight. I didn’t get much sleep on the train last night so am going to bed about 8:00 tonight. I will have to get up early for K.P. 6:30 I think on Sunday.

I had to get up at 6:45 this morning and I was through at 7:00 tonight. It wasn’t too bad this time. L__ was over a while. This coming week won’t be too bad, because some of the boys are home for New Years. The weather has been hot lately. I hope it can stay that way for a while.