The Vortex is a Downwards Death Spiral

More than 50 years before Rutherford's proof of the positively charged nucleus in 1909 (published in 1911), a physicist named Rankine had notions which today sound downright prescient. He described in 1850:


Each atom of matter consists of a nucleus, or central point, enveloped by an elastic atmosphere which is retained in its position by attractive forces, and that the elasticity due to heat arises from the centrifugal force of these atmospheres, revolving or oscillating about their nuclei or central points. link

There were no plus and minus charges in Rankine's so-called Vortex Theory.  There were no protons and electrons--there was no polarity. Things were held together presumably by gravity.  But the notion of a hard kernel having squishy orbiting clouds is intriguing in retrospect. It's reminiscent of what came later.  Or something.

Then there was Nagaota whose 1904 planetary model for the atom was in part correct.  Just as the planets circled the sun with gravity and momentum in balance...so it was at the atomic level with electrostatic forces and momentum: a tiny negative electron revolved around a positive nucleus. What gravity writ large, electrostatics writ small: electrostatic attraction countered an electron's momentum, keeping things in balance. This had the added appeal of offering a certain symmetry for the outwardly large and the inwardly small: everything was just whirling masses in motion. Turtles all the way down and up. A few remaining fundamental differences between atoms and planets remained, such as the way that electrons always circled in discrete orbits while planets did not (or did they?), but these problems were sure to be solved.  And as wrong as the model proved to be, it stuck with us: 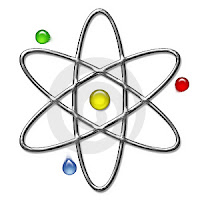 Posted by chickelit at 1:17 PM