The more important fundamental laws and facts of physical science have all been discovered, and these are now so firmly established that the possibility of their ever being supplanted in consequence of new discoveries is exceedingly remote.... Our future discoveries must be looked for in the sixth place of decimals.
- Albert. A. Michelson, speech at the dedication of Ryerson Physics Lab, U. of Chicago 1894


The following year, Roentgen discovered X-rays; a year later, in 1896, Becquerel discovered radioactivity; and J.J. Thomson electrified physics in 1897 when he announced that cathode "rays" were really beams of electrons or what he called "corpuscles."

Thomson knew as much as anyone about electricity and its conduction--that electricity could flow here and there like invisible water and it could even be tamed and put to use. The electron, named after the Greek word for amber, had even been proposed before but had remained safely ensconced in matter. Thomson disclosed it. Disrobed it. What the electron lost in privacy, it gained in primacy and notoriety. Alone and naked for the first time, the electron succumbed to further scrutiny--first its mass-to-charge ratio was measured by Thomson. Soon after, it was actually weighed by Millikan (ironically at the University of Chicago--see quote above). But the real shocker at the time was that atoms were divisible--they were not a-tomos. This destroyed a comfortable notion of integrity.

Knowing that he could strip off little negative bits, but not having a working notion of the countervailing positive portion which was surely left behind, Thomson theorized that electrons were uniformly sprinkled in a positively-charged, amorphous medium. The model was dubbed Plum Pudding. And why not? Thompson went with what he knew.  He would have overreached any data to have proposed anything else. And so, for the interregnum roughly corresponding to the Edwardian era—until Ernest Rutherford undid it—the atomic model looked like this: 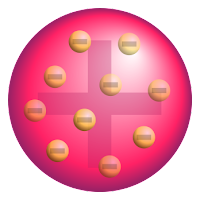 This story continues here: link
Posted by chickelit at 10:01 PM