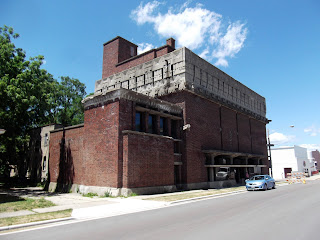 Frank Lloyd Wright's monolithic German Warehouse stands forlornly on the corner of S. Church and E. Haseltine in Richland Center, WI. I've watched that building now for almost half a century. Highway 14 used to run right through town and the warehouse was on the left, exactly where we always turned right to get to my grandma's house when I was growing up.  I was back there recently and got another look. The old Warehouse is looking worse--it actually looks abandoned:


I'd like to know who owns it and more about the problems associated with keeping it intact. I did not get a look inside--it's probably pretty awful--Wright's roofs were notoriously leaky and the German Warehouse had a flat one--a worst case scenario in Wisconsin winters.

Wright designed the building as a warehouse with some small retail space, but it never caught on. What could it be used for today? Not for its original purpose--storing stuff.  Practically anything Wright-related not nailed down is already owned and safely housed somewhere else so a new museum of his "stuff" would probably not fly. Richland Center is not exactly a tourist destination. And yet it could be something--it must be something...*

When I was in Richland Center, I drove my kids and my mom around town, letting her free associate about her past: who, what, where, & when. Wright was born in that town in 1867 and my mom can still point to the house which she knew growing up as "his," but she admits that it's always been controversial. Wright left Richland Center early on for Madison, only returning there after the First World War to build the Warehouse for a client named A.D. German. Things never went well. The people of Richland Center never fully embraced their native son. I still heard the echos growing up in the 1960s: "The Warehouse is different" ("different" is Wisconsin code for ugly); "he never paid his debts" or "he ran that coed school over in Spring Green"--that's code for scandalous.  But times change.

My mom also showed me a tiny cemetery outside of Richland Center where four of her sisters lie buried. They bracketed her in age but three died as young children and their graves lay hidden and forgotten for 70 years--much like their stories--until she finally bought them a decent tombstone this year. She showed me where. I know that there is a Wright somewhere back in my mom's genealogy and I noticed the name "Wright" on a nearby gravestone so I wonder if we're related--she didn't know but I'm tempted to find out.

*...what after all are these buildings now if they are not the tombs and sepulchers of Frank Lloyd Wright?
Posted by chickelit at 8:03 PM