If you were a kid of a certain age who collected coins, you might recall that one unattainable possession: the 1909-s V.D.B Lincoln Cent. 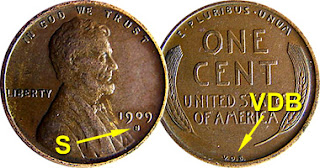 The "S" stands for San Francisco where it was minted; the V.D.B. stands for the sculptor's name, Victor David Brenner. When the coin first appeared in 1909 to mark the centennial of Lincoln's birth, it was the first coin to bear the likeness of a real person.  Previously, all U.S. coins had carried the likenesses of stylized subjects like Lady Liberty, Indians, and so forth. Also, previous coin designs had had artist's initials, but VDB's were deemed too ostentatious--or too something--and were moved to the front of coin, just under Lincoln's shoulder, where they still reside. Pull out a penny and have look.
Posted by chickelit at 11:48 AM