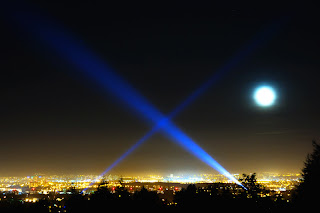 Natura non facit saltus
--Nature makes no leaps
The other day I was admiring one of those powerful spotlights that shines into the heavens at grand openings and such. What I pondered was how fast the beam can move about the sky-seemingly at hundreds of miles per second as it arcs across a cloud-covered sky.  Here's a good visual of what I'm talking about: link.

The source of the beam is like a fixed point source, changing direction by several degrees--but not really moving (translating) much at all, yet projecting and amplifying its own radial motion by a factor of r sin(theta), where r is the distance projected and theta is the angle swivelled through.

WTF?  What does trigonometry have to do with real life and making leaps? The light beam models something that interested me once: how small seemingly insignificant changes get amplified at a molecular level.

Quantum mechanics seems to defy the long-held maxim Natura non facit saltus.  This was Darwin's credo too: he believed in a smooth, uninterrupted evolution of species. But what if small but significant changes in genetic code did indeed lead to seemingly great leaps in change?