Letters Home: All Quiet on the Eastern Front

I just wanted to wish all the veterans in my circle of acquaintances (real and virtual) a great day and to also thank them for their service. There was a time when I was around people who cared very little for people who were or had been in the service.  Most of them were students and academic types, mostly of a different generation.  I'll never forget the looks on some people's faces about 10 years when we decided to moved to Oceanside. And also what one Canadian dweeb said to me all in earnestness: "You do know they have flagpoles in their yards up there?"
Priceless.

"Letters Home" is a year old today. I posted the first letter here: link.  I know it gets boring but there is sporadic excitement. Not this time though. Here he doesn't even mention Armistice Day (the name wasn't changed until two years later); nor does he mention Eisenhower's election victory.  He was 20 at the time and the 26th amendment (giving 18 year olds the vote) was still decades away. Plus I remember feeling distanced from American politics myself while overseas. I missed Clinton's whole campaign and election in 1992. I didn't vote that year.

Dear Mom and All,
I just got back from the show. It sure was funny. Abbott and Costello, "Lost in Alaska." [1]
I still haven't got the boys watches. I sent that stein and a book today. [2] I suppose it will take a month for them to get there.
We had one snow here so far. It melted before too long though.
I forgot about Halloween this year. You know we were on those maneuvers and I didn't remember about it till we got back last Tue.
I got that letter quite a while ago. The one with the pictures of R's car. I thought I said something about it in one of my other letters. In that picture of duke standing by the planes, sure looks like R.
Tell Jr. not to get me a Spot Light. It will be a long time yet before I need one. I suppose 9 or 10 more months of here.
This picture of myself is a 8 minute job. It isn't took bad for a quick one. I still got the same old mug. 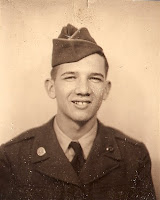 I weigh 175 and am still 6 foot tall.
Have Jr. snap a picture of his pickup and sent it across the pond. I guess this is it for now, no news.

[1] IMBD for "Lost in Alaska": link
[2] I wrote about the stein here. I wish I knew which book he sent back.
[3] R and P were his teenaged brother and sister. His seven siblings were all spaced less than two years apart.
Posted by chickelit at 12:01 AM