Letters Home: "I don't know how they live on that"


Dear Mom and All,


I thought I would get a letter from you today but I didn't. I got one from M yesterday but haven't answered it yet. [1] We had our first real snow last night. About 2 inches. It isn't too cold yet over here but it won't be long. By the way now that I got my boots ok you just as well could sent my tankers jacket. I think you can send it by air mail. It's cold enough now to be wearing it. You should be getting a box from me one of these days. M wanted to know if I could use some homemade candy. That sure was a foolish question. I can always use some candy (homemade).


We are going over in the French Zone of Germany the 4th through the 19th of Dec. to fire the 90 M.M. on our tanks. [2]  We have to load them on flat-cars again. [3] It's about 100 miles. If I get back in time I might go to Marktredwitz for Christmas. That’s the place we stayed for that week. [4] Two different families I got aquainted with there want me to come back.


Santa Claus comes on the 6th of Dec. and Christmas is on the 24th. [5]  The people over here don't have too big a Christmas because they can't afford much. The average income a month is 200 marks ($50.00). I don't know how they live on that because the price of food is about the same as in the states. Not much cheaper.  I guess they don't spend much for entertainment. The kino (movies) are about all. I know quite a few German words already. Some day I'll make a list. Nix means no. Barnhof means train station. [6]


Next Thursday is Thanksgiving. We get the day off. I think we will have turkey and all the trimmings. What are the kids around town doing? I guess I never will get around to writing R. I guess I go to the show nights too much. It's only about a block away. I just got back from one tonight. "Bells On Their Toes." [7] It was good. It was "Cheaper by the Dozen" number two. A family picture. 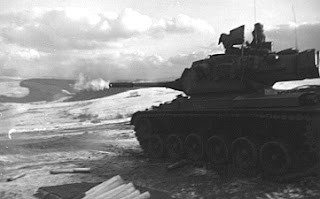 [3] A link to a photo of Patton tanks on flatcars around the same place and time as my father's service. link

[4] There seems to be something missing in the chain of letters.  I will figure this out and post the missing letter if I find it.

[5] December 6th is St. Nicholas' Day. German tradition (Dutch too) has children receiving gifts on that day. In Holland, kids put out little wooden shoes on the evening of the 5th in hopes that Sinterklaas will leave them candy.

[6]  Gotta laugh at his earnestness. Years later, when my parents visited me in Zurich, he still called the Bahnhof the "Barnhof."  A few other GI-German phrases from the era that I heard growing up:
Was ist los? was mistranslated into "Wash his clothes?" When asked that, an annoyed GI would reply: Wash your own damn clothes! Then there was the phrase:
"Shlaffen mit die Froyline, das is prima good!" which needs no translation.