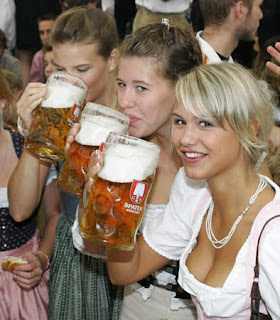 A letter from my then 20 year-old father to his 18 year-old brother:

I got another letter from you today, so before I do anything else, I'm going to sit right down and answer it.  It's Sat. night and I haven't got anything to do. The movie theater is only a stones throw away, but I  already saw it.  I usually go everytime it changes. Everything else over here is dead. The girls over here aren't worth taking out. I have only met a couple of nice ones. One is French the other Polish. These German girls are fat, homely beer drinkers. They seem to be that way in all of the American zone and I've been all over it. We're going over in the French Zone the first of the week. I'll see how they are over there.

I sure was surprised to hear about Albert.  If you can get his address, send it across the pond so I can drop him a line. You better forget about joining anything like the Navy. 4 years is a along time. I only got 11 more months. I've been in 13 months today.  It don't seem like it's been 5 months since I've been home but it has. 4th of July to the 4th of Dec. I think the time will go faster after the first of the year.  I don't write any of the kids around R.C. so I don't hear much news of what's going on. I guess a lot of them are getting hitched around there.

How are you making out with the girls? I suppose you got one in all the towns around there. Muscoda etc. Yvonne, that girl I write to in Milwaukee said she saw your car, and thought it looked nice. That was about a month ago. She said you was going with a Miller girl.

I don't think you will get drafted till about March. They can't draft 19 year olds now (so the papers over here say) till it comes down from Congress again.  Albert was 20 wasn't he?

It's been a little cool over here, but the snow don't stay long. If I can get through this winter, I will have it made. Monday is payday and 3 of us are going in together and buy a radio for our room.

I guess I will have to sign off for this time,