Past and Present: Now The Twain Shall Meet 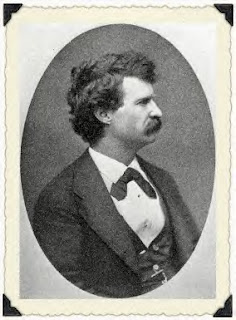 Now, if I wanted to be one of those ponderous scientific people, and `let on' to prove what had occurred in the remote past by what had occurred in a given time in the recent past, or what will occur in the far future by what has occurred in late years, what an opportunity is here! Geology never had such a chance, nor such exact data to argue from! Nor `development of species', either! Glacial epochs are great things, but they are vague--vague. Please observe. In the space of one hundred and seventy-six years the Lower Mississippi has shortened itself two hundred and forty-two miles. This is an average of a trifle over one mile and a third per year. Therefore, any calm person, who is not blind or idiotic, can see that in the Old Oolitic Silurian Period, just a million years ago next November, the Lower Mississippi River was upward of one million three hundred thousand miles long, and stuck out over the Gulf of Mexico like a fishing-rod. And by the same token any person can see that seven hundred and forty-two years from now the Lower Mississippi will be only a mile and three-quarters long, and Cairo and New Orleans will have joined their streets together, and be plodding comfortably along under a single mayor and a mutual board of aldermen. There is something fascinating about science. One gets such wholesale returns of conjecture out of such a trifling investment of fact.