Umpolung: The Strange Case of Dr. Proton and Mr. Hydride 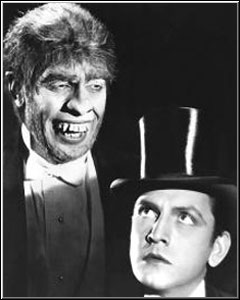 Umpolung is a chemistry term meaning "reversal of polarity." This is a useful trick, to change something from having a plus charge to having a minus charge. Hydrogen is the simplest example and shows how the same element behaves differently depending on whether it is cloaked in electrons or not.

The promiscuous proton, H+, flits from base to base in water. But hydride (written as H-), laden with two electrons, usually seeks an electrophile with which to couple irreversibly. If proton and hydride get together, they make little H2's.

Hydrogen usually appears on the upper far left side of the Periodic Table sitting above Li, Na, K,.., emphasizing its usual cationic (H+) character.  But umpolung explains why it's sometimes useful to think of hydrogen as belonging on the upper right side (next to He), sitting above the halogens, F, Cl, Br,.., emphasizing its anionic H- = hydride ~ halide character.
Posted by chickelit at 3:30 PM