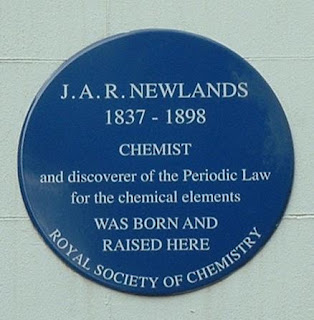 
John Newlands was a 19th century chemist, inglese italianato, and an avid musician. He was among the first to see underlying rhyme and reason in the matter of the elements—even before Mendeleev did. But he mistook his insight as a fundamental harmony like the one between musical notes and for this he was rebuffed by his peers at the time.

Newlands arranged the then known elements in order of increasing atomic weight. He noticed that the eighth element (fluorine) resembled the first one (hydrogen), and that the ninth element (Na) resembled the second one (Li), and so forth. His observation that every eighth element had similar properties led him to compare his "chemical octaves" with musical octaves, and he called it his law of octaves. The first two octaves of elements behaved:

One obvious problem with Newlands' octaves is that he left no room for the noble gases (which hadn't been discovered yet). So what Newlands described was not a law of octaves but rather a law of "nonaves": 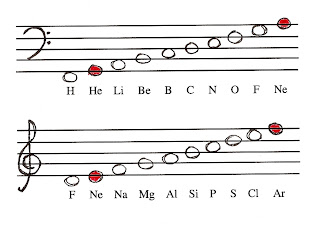 Another problem with Newlands' scheme was that he tried to fit elements beyond chlorine into his scheme, including some known transition metals and he made some real errors. But give the man some credit.  Like Theo Boehm tweeted to me:

Well, Newland was on to *something* Just that musical analogy didn't quite make it. Tricky to work music into other areas! link