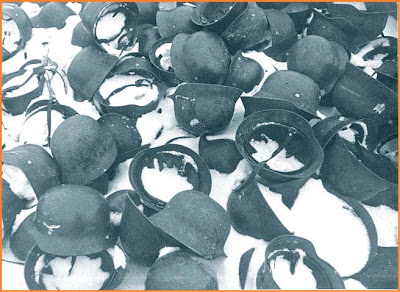 ...Dearest Father, the division has been trimmed down for the big battle, but the big battle won't take place. You will be surprised that I write to you and in care of your Office. But what I have to say in this letter can only be said among men. You will transmit it to Mother in your own way. The word is out that we can write today. For one familiar with the situation that means that we can do it just once more.

You are a colonel, my dear Father and a member of the General Staff. So you know what this means, and I needn't go into explanations which might sound sentimental. This is the end. It will last perhaps another week, I think, then the game's up. I do not want to look for reasons which one could marshal for or against our situation. The reasons are altogether unimportant and pointless. But if I am to say anything about them, it is this: Do not look to us for an explanation of the situation, but to yourselves and to the man* who is responsible for it. Don't knuckle under --you, Father, and all those who think like you. Be on guard, so that a greater disaster does not overtake our country. The hell on the Volga should be a warning to you. I beg you, don't brush off this experience.

And now a remark about the present. Of the whole division only 69 men are still in fighting condition. Bleyer is still alive, and so is Hartlieb. Little Degen lost both his arms; he will probably be in Germany soon. It is also the end for him. Ask him for any details you would like to know. D___ has lost all hope. I would like to know what he is thinking at times of the situation and its consequences. We still have two machine guns and 400 rounds of ammunition. One mortar and ten shells. Besides that, only hunger and fatigue. Without waiting for orders, Berg broke out with twenty men. Better to know in three days how things will end, than in three weeks. Can't blame him.

And now to personal matters. You can be sure that everything will end decently. It is a little early at thirty, I know. No sentiments. Handshake for Lydia and Helene. Kiss for Mother (be careful, old man, think of her heart trouble). Kiss for Gerda, regards to all the rest. Hand to helmet, Father. First Lieutenant ____ respectfully gives notice of departure.


A key to understanding this ongoing series is here, and here. Each letter (39 in all) was written by a different and anonymous German soldier who knew he was going to die. I associate these letters with Christmastime for reasons explained at the links.
Posted by chickelit at 10:19 AM