I've decided to keep publishing my father's letters (not all of them) but cherry-picking the ones that report something interesting.
To continue, I'm not sure how long his induction at Fort Sheridan, IL lasted, but by mid-November, 1951, he was already writing from Fort Knox KY. Here he describes his routine:

I just got back from church. We don‘t have to get up till 7:30 Sun morning and church is at 9:00, till 10:30. I would have to have L’s address in order to find him because this camp is so big. Tomorrow we start our first 8 week’s cycle of basic training, mostly marching. The last 8 weeks is tank training. Driver, gunner, mechanic, etc. I don’t remember having any navy blue pants. As for bringing my car down I don’t think the back tires would hold up. I should have had them recapped like I did the front ones in Madison. Maybe I can do when I get home. We have no snow but its kind of chilly in the early mornings. It don’t take long to warm up...

...when you are marching. I am sending a couple of pictures of myself, one was taken in Sheridan, the other in Knox. I went to the show last night with Jim and Leslie M. Send that Ike jacket as soon as you can. You know the one J. gave me. Big top pockets. They only issue one because they cost $24.00 apiece. They gave us 6 patches to sew on our shirts. You can buy them extra at the PX for 15¢ so I’m sending one. One of the kids* can have it but I don’t think you can wear them. Something to look at. I think I will go down to the P.X. now and listen to the Juke box.

*by "kids" he was referring to his younger siblings.

The Army routinely sent letters to the parents of draftees urging them to be mindful of their son's mood and moral.  Here's the letter my grandparents received: 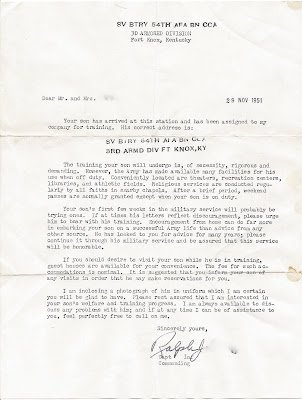 By all accounts, my father's CO was a decent man; strict to be sure, but a man aware of the young men in his charge.
Here's my father's next letter which shows his desire to return back home; he was still wavering between home life and army life: ( I love how he boasts about being a good shot on the rifle range-so reminds me of my son-his grandson-whom he would have adored, had he lived to know him):

I should be home Sat. night Dec 22. 70% of the 200 boys in this platoon are coming home for Christmas and 30% for New Years. I had my name picked out of a hat and had only 32 chances out of 50 to come. I could have traded my pass for one for New Years and got $10.00 to boot, some wanted to come at Christmas that bad. Several sold there’s so I guess everyone is happy. I am on leave at 12:00 Midnight Dec. 21 till midnight Dec 28. I won’t get too much time at home. I am sending a extra note for dad and R. to do. I haven’t got the Dem.* yet you sent.  You can give this picture to P., she wanted one. We was inside part of the time today because it was raining. I made out pretty good on the Rifle Range Tues. Tomorrow (Thurs) we go out again. I don’t think I will have any trouble hitting the bulls eye most every shot at 200 yds. I have a couple of 30 carbine shells I am bringing home to show you. Next week we go on tank driving and maintenance of tanks. Today it was tank radios. $80,000 tanks. They sure got a lot of them. A movie picture was filmed here at Knox that had 150 tanks from here. “The Tanks are Coming.” Some of the movies are supposed to be here 6 mo. before the public sees them. Will sign off for now.

1. I forgot to put the new fuel pump gasket in when I put the new one on (its in the trunk) so you can put it on if it isn’t to cold up there. Martin B. helped me put it on and he knows we forgot it.

2. Get the battery charged. I hope it will start even if it is a small one. I don’t think any gas leaks around it but you can smell it inside. I won’t get any antifreeze until I get there. If I had better tires on behind I would have one of you bring it down.


*The Richland Democrat, a local newspaper in Richland Center, WI.

Posted by chickelit at 1:17 AM