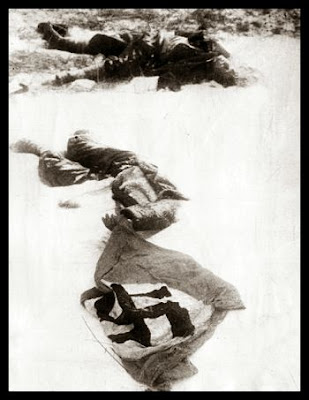 ...I have received your answer. You will hardly expect thanks for it. This letter will be short. I should have known better when I asked you to help me. You always were and you remain forever 'righteous.'  This wasn't unknown to either Mama or me. But we could hardly expect that you would sacrifice your son to 'righteousness.' I asked you to get me out of here because this strategic nonsense isn't worth biting the dust for. It would have been easy for you to put in a word for me. But you don't understand the situation. Very well, Father.

This letter will not only be short, but also the last one I write you. I won't have any more opportunities to write you, even if I wanted to. It is also unimaginable that I should ever stand face to face with you again and have to tell you what I think. And because neither I in person nor another letter will ever speak to you again, I will once more recall to you your words of December 26:  'You became a soldier voluntarily; it was easy to stand under the flag in peacetime, but difficult to hold it high during war. You will be faithful to this flag and be victorious with it.'

These words were much clearer than the position you have taken during the last few years.  You will have to remember them, because the time is coming when every German with any sense will curse the madness of this war. And you will see how empty are the words about the flag with which I was supposed to be victorious.

There is no victory, Herr General;* there are only flags and men that fall, and in the end there will be neither flags nor men. Stalingrad is not a military necessity but a political gamble. And your son is not participating in this experiment, Herr General! You blocked his way to life; he will choose the second way, which also leads to life, but in an opposite direction and on the other side of the front. Think of your words, and hope that, when the whole show collapses, you will remember the flag and stand by it.

*In the original German edition, the author switches here to the formal/polite form of address for the remainder of the letter, dropping the familiar "Du" form of address used previously. The son linguistically distanced himself from his own father, addressing him as if he were a stranger.
Posted by chickelit at 11:18 AM