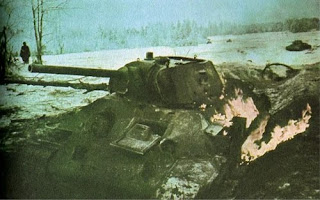 ...During the last few nights I have wept so much that it seems unbearable even to myself.  I saw one of my fellow soldiers weep also, but for a different reason.  He was weeping for the tanks he lost; they were his whole pride.  And though I don't understand my own weakness, I do understand how a man can mourn dead war materiel.  I am a soldier and I am prepared to believe that tanks are not inanimate materiel to him.  But everything considered, the remarkable fact is that two men weep at all.  I was always susceptible to tears.  A moving experience or a noble action made me weep.  It could happen in a movie theater, when I read a book, or saw an animal suffer.  I cut myself off from external circumstances and immersed myself in what I saw and felt. But the loss of material goods never bothered me.  Therefore, I would have been incapable of weeping about tanks which, when they run out of gas, were used in the open steppes as artillery and thus easily shot to bits.  But seeing a fine man, a brave, tough and unyielding soldier cry like a child over them--that did make my tears flow in the night.

On Tuesday I knocked out two T34s with my mobile anti-tank gun.  Curiousity had lured them behind our lines.  It was grand and impressive.  Afterwards I drove past the smoking remains. From a hatch there hung a body, head down, his feet caught and his legs burning up to his knees.  The body was alive, the mouth moaning.  He must have suffered terrible pain.  And there was no possibility of freeing him.  Even if there had been, he would have died after a few hours of torture.  I shot him, and as I did it, the tears ran down my cheeks.  Now I have been crying for three nights about a dead Russian tank driver, whose murderer I am.  The crosses of Gumrak* shake me and so do many other things which my comrades close their eyes to and set their jaws against.  I am afraid I'll never be able to sleep quietly, assuming that I shall ever come back to you, dear ones.  My life is a terrible contradiction, a psychological monstrosity.

I have now taken over a a heavy anti-tank gun and organized eight men, four Russians among them.  The nine of us drag the cannon from one place to another.  Every time we change position, a burning tank remains on the field.  The number has grown to eight already, and we intend to make it a dozen.  However, I have only three rounds left, and shooting tanks is not like playing billiards. But during the night I cry without control, like a child.  What will all this lead to?

*Gumrak was the name of the German airfield at Stalingrad
Posted by chickelit at 1:10 PM