Ligation Was His Religion But His Love Was Platonic 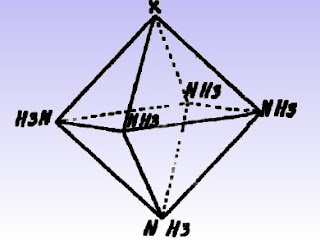 A relatively obscure Swiss chemist named Alfred Werner won the Chemistry Nobel Prize in 1913. In retrospect, it was ironic (but coincidental) that someone from a neutral country won for ostensibly organizing things, a year before things really started to fall apart in Europe. Stockholm did the same thing the following year when they awarded T.W. Richards, an American, the prize in the midst of the Great War. They even gave the prize to a German, Richard Willstätter, in 1915 for his seminal work on chlorophyll (which happens to an example of a magnesium-ligand complex: link). Then the Nobel Prize was suspended for two years until 1918 when another German, Fritz Haber won it, despite his innovations in poison gas warfare. But back to Alfred Werner.  What did he do that so moved the committee?

For starters, he reorganized the Periodic Table and he taught generations of chemists how to think about it. Secondly, he got chemists to think beyond carbon and the tetrahedron--to octahedra and polyhedra. What le Bel and van 't Hoff did for carbon, Werner did for everything else. He introduced the general notion of the coordination complex, merging the novel concept of a central atom surrounded and ligated with ligands arrayed like classical Platonic solids. Something new and something old.

An elderly professor once showed me the carefully preserved remnants of Alfred Werner's laboratories at the University of Zurich. They're stored under lock and key these days, partly out of lack of space, partly out of lack of interest. And yet Werner's long forgotten contributions changed chemistry as much as any of his peers.
Posted by chickelit at 11:26 AM