Forces of exclusion are repulsive. Talking chemistry, it's called hydrophobia. Grease, for example, will not dissolve like salt does in the sea; instead it clots together, usually floating on top because it lacks the gravitas of water. And while grease is hydrophobic, it is lipophilic, a word that, like hydrophobia, also comes to us via Greek, rooted in the word lipos.

Lipids and water don't mingle. It's not that lipids are weak--they are very strong internally, giving us energy--they just lack enough polarity to part water like salt can. Salt ions actually direct water: cations attract the oxygen part of H2O and anions attract the hydrogen part. These are electrostatic forces. They are intermolecular forces meaning between atoms and molecules: 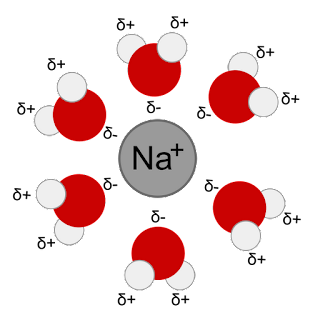 While lipids have strong intramolecular forces, they lack intermolecular forces like hydrogen bonding in water (this also explains hydrocarbons' volatilities). Because lipids don't mingle with water, they appear to seek their own kind, separating out. But why don't they mingle with water? It's because they restrict water's freedom. They have no charge to slake. Most lipids don't hydrogen bond like water does: 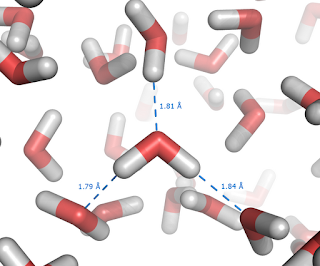 Notice the orientation of white to red (hydrogen to oxygen, plus to minus),  H-bonding is an attractive force, not unique to water, but best exemplified by it. When a lipid or a hydrophobe enters the picture, the waters give up their ordered coziness and are forced to reorient around each hydrophobe to make what's called a cage--without enthalpic recompense as with a salt. Thus the exclusion is an entropic effect because it relates to physical law and order.
Posted by chickelit at 5:54 PM