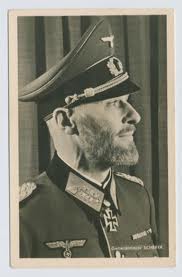 ...Just now the master sergeant told me that I cannot go home for Christmas. I told him that he has to keep his promise, and he sent me to the captain. The captain told me that the others had wanted to go on leave for Christmas too, and that they too had promised it to their relatives without being able to keep the promise. And so it wasn't his fault that we couldn't go. We should be glad that we were still alive, the captain said, and the long trip wouldn't be good in the cold winter anyhow.

Dear Maria, you must not be angry now because I cannot come on leave. I often think of our house and our little Luise.  I wonder if she can laugh already. Do you have a beautiful Christmas tree? We are supposed to get one also, if we don't move into other quarters.  But I don't want to write too much about things here, otherwise you'll cry.  I'll enclose a picture; I have a beard in it; it is already three months old and was taken in Kharkov by a friend. A lot of rumors are going around here, but I can't figure them out. Sometimes I am afraid we will not see each other again.  Heiner from Krefeld told me that a man must not write this; it only frightens his relatives.  But what if it's true!

Maria, dear Maria, I have only been beating around the bush. The master sergeant said that this would be the last mail because no more planes are leaving. I can't bring myself to lie. And now, nothing will probably ever come of my leave. If I could only see you just once more; how awful that is!  When you light the candles, think of your father in Stalingrad.

________________________
A key to understanding this ongoing series is here, and here. Each letter (39 in all) was written by a different and anonymous German soldier who knew he was going to die. I associate these letters with Christmastime for reasons explained at the links.
Posted by chickelit at 4:29 PM