Bromine Has A Hangover 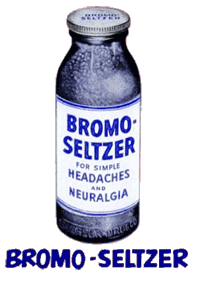 Most of the world's bromide is dissolved in the sea, but chloride still outnumbers it by about 500 to 1. Originally dubbed "muride" from the Latin word muria meaning brine,* bromide was renamed after bromos which means stench (of male goats) in Greek.

Elemental bromine is a nasty red liquid (bromine and mercury are the only two liquid elements at ambient temperature and pressure). An electron short of an octet and tranquil stability (as bromide), the fuming element can still suck the electron out of many a juicy nucleophile, as I wrote back here. But its power for doing so is less than chlorine's and much less so than fluorine's power. Bromine can still "oxidize" iodide back to iodine, though.

Bromine's usefulness is diminishing. Its greatest ex-use was as ethylene dibromide--an additive for leaded gasoline (it scavenged the lead). Film photography used to rely on silver bromide, but digital photography is killing off that use. Bromide used to be a mild sedative and hangover cure--until it was outlawed for over-the-counter sales around 1995. The main use for the element today is for making fire retardants--as organobromides which are ubiquitous in electronic products.
______________________
*Cf. Muriatic acid, the original name for hydrochloric acid: link
Posted by chickelit at 8:40 PM