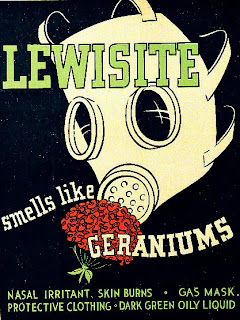 Arsenic is called the "King of Poisons" and the "Poison of Kings" due to its long history. Interested readers (I'm looking at you, Jason) can GIY or perhaps even suggest a reference in the comments.

Lesser known is arsenic's more recent role in our own poison gas warfare program. I mentioned Lewisite here, but I thought that a more formal introduction was in order. Even a non chemist can recognize arsenic's central role in Lewisite's structure. Here it is:

We made a lot of Lewisite shortly after WW I but we never deployed it as far as I know. Ridding our stockpiles has taken forever and an old cache was recently found in Washington, D.C.  Arsenic just can't doff its nasty reputation, even cloaked in disguise.
Posted by chickelit at 5:21 PM