Together (Again) and R.I.P. Uncle J 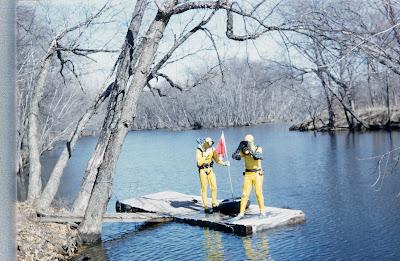 My uncle J died today--he was 81.  I wrote about him in my "Letters Home" series here.  He was in Korea while my dad went through basic training and did his Army service in Germany. Uncle J lived a good long time and died suddenly at home this morning. He had a wife (they were married 58 years), four children, and four grandchildren.

There he is together with my father in a photo dated 1960 (the year I was born) at a place named Long Lake, WI.  I don't recognize those yellow wetsuits (they look too baggy to be wetsuits).  My mother always teased my dad that he was "the best dressed man underwater"; this was meant to (ahem) compensate for a certain nonchalance on land shall we say?  Anyway, those wetsuits might be early Dunlop suits which appeared in the early '60's before every wet suit became--to paraphrase Henry Ford--available in every color so long as it was black.  I can tell them apart by the stances. Uncle J was always heavier set than my dad.

To be the oldest in a family, especially a larger family, must be akin to being a parent (but what would I know: I'm the youngest in a very small family).  I looked up some family history tonight: Uncle J. was the oldest in a family of eight. My father was third-born and the second boy out of five. I think that older siblings make a lot of mistakes which the younger ones can avoid just by observing. I know my dad looked up to him his whole life and maybe now they are both together again, looking down at me--at least I hope so.  R.I.P Uncle J.
Posted by chickelit at 10:36 PM