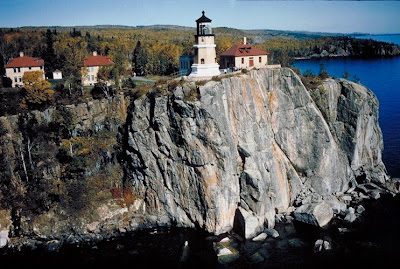 Years before my dad took me and my brother diving up North, he took friends and diving students, and once or twice he took my mother.  She was determined not to be a SCUBA widow and she had an "if you can't beat 'em join 'em" attitude about the whole thing.

He took her to the Madeira wreck that I described back here. That is Gold Rock and the rocky beach in the upper right corner of the photo above. The wreck was only accessible then from the roadside shoulder of Highway 61 but access has improved since those days.  Back then there was no proper place to change clothes at the dive site. My uninhibited dad had no problem stripping down nude in semi-public places, but my mother was a different story.
"Nobody will see you" he reassured her after they had carried all their gear down to the beach.
She nervously glanced up at the lighthouse. She saw that the lighthouse had an unobstructed view of her (you can see her point of view here--the lighthouse is in the upper right background).  Throwing caution to the wind, she undressed and changed into her bathing suit and wet suit.

Later that evening after the dive, they met some friends for dinner in Two Harbors. After dinner, they drove back up Highway 61 and stopped at the lighthouse, which had only recently opened to the public. To my mother's shock and horror, the lighthouse had one of those telescopic, coin-operated viewfinders, and it clearly looked down on the beach where she had undressed earlier that afternoon. 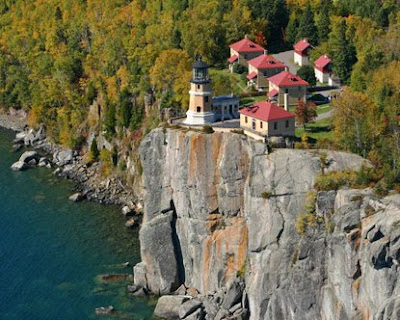